Aidan just completed a weeks work experience at Down’s syndrome Scotland. During his time with us he shadowed a number of staff members to learn what we do and get some hand on experience of what it is like to work for a charity. He also had the opportunity to watch the Peanut Butter Falcon and wrote this review for us.

The film Peanut Butter Falcon, directed brilliantly by Tyler Nilson and Michael Schwartz, is a great, heart-warming movie. It tells the story of Zak (Zack Gottsagen), a young man with Down’s syndrome who has an ambitious dream, even though he is trapped in a care home with no family. He meets Tyler (Shia LaBeouf), a lonely fisherman who recently lost his brother and was chased out of his community. As the story progresses the bond between the two lead actors becomes more and more special.

Overall, the acting throughout the film was really good however the lead actors (Zack Gottsagen, Shia Labeouf and Dakota Johnson) made the movie something special. There have been reports that Shia and Zak formed a genuine bond whilst filming the movie and I think that this shone through in the finished film. You could feel the respect and warmth that they had for each other and I think that was a big factor in making the film as entertaining and heart-warming as it was.

I think that the film raised an important issue that is prevalent amongst young adults with learning disabilities; isolation. At the beginning of the movie Zak is in a care home designed for older people with no one his age or anyone with the same hobbies or interests around him. You can imagine this happening in real life when a vulnerable adult is left without a plan for the future and with no family or friends.

Another issue that the film raised was the ignorant way some people treated Zak. The word ‘retard’ was used repeatedly throughout the film, even by a member of staff in the care home. At one point he is also pushed into a river by a young boy, even though he had said that he couldn’t swim.

The film was also inspirational. As the film goes on Zak develops into something he would’ve deemed impossible at the start. He becomes more independent and less reliant on his carer (Dakota Johnson). Tyler challenges him throughout the film and even teaches him how to swim. This may be a reach, but there is a part in the film where Zak does something deemed as impossible and I believe the directors put this scene in deliberately to show that people with Down’s syndrome have amazing potential.

In conclusion, I thought this was a great movie. The balance of adventure, comedy and seriousness and the incredible acting played a big role in making the film as good as it was. I would rate this film a 9/10. 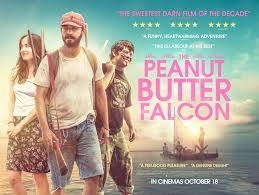 Thank you to everyone at Murray and Currie who took part in Movember to raise awareness and funds for Down's Syndro… https://t.co/90gO9e3kLh