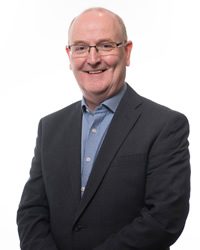 Down’s Syndrome Scotland (DSS), the national charity supporting families and people with Down’s syndrome in Scotland, is delighted to announce that Eddie McConnell has been appointed as its new Chief Executive.  Eddie is currently Director of Development at Sense Scotland and he will take up his new appointment at the charity in September 2019.

Eddie has held several senior leadership roles across both the third sector and the public sector in Scotland and he is currently a member of the Ministerial Advisory Group for Disabled Children and Young People and was closely involved in shaping the Scottish Government’s Keys to Life strategy for people with a learning disability. In his current role with Sense Scotland, Eddie led the development of the TouchBase model overseeing the opening of TouchBases in Lanarkshire and Ayrshire.  He also led the development of the organisation’s ground-breaking Early Years Programme throughout Scotland and was central to Sense Scotland’s success in achieving the 5-star Recognised for Excellence Award.  A father of five, Eddie’s youngest child has Down’s syndrome.

“We were delighted at the calibre and level of interest in the Chief Executive role and we are thrilled to have attracted an individual whose standing and reputation across the sector is second to none.  Eddie will bring his enthusiasm, inclusive approach and extensive experience to the role of Chief Executive of our charity.  He has an established track record of success and his commitment to promoting the rights and needs of all people with a learning disability is evidenced in his role as Chair of the Scottish Commission for Learning Disability.  In addition, his family experience as a parent of a child with Down’s syndrome equips him well to lead our organisation forward as we build on the legacy from last year’s World Down Syndrome Congress held in Glasgow.  We look forward to welcoming Eddie on board later this year.”

“Our family has a long association with the work of Down’s Syndrome Scotland, and I consider it a privilege and an honour to be appointed its new Chief Executive.  I’m looking forward to joining a great staff team and working closely with the Board and local Branches of the charity as we drive forward our collective efforts to transform the outcomes for people with Down’s syndrome all over Scotland.  The charity has a great reputation for supporting families and campaigning for a better deal for people with Down’s syndrome.  I’m delighted to join such a positive and ambitious organisation.”

If you are a person who has Down's syndrome and are 18+ you are invited along to join Brenda for a catch up over so… https://t.co/J7gJoNhkZX