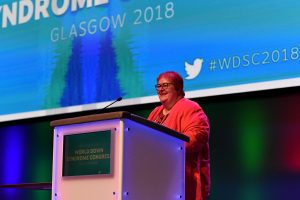 After 11 years as Chief Executive, Pandora Summerfield has decided it’s the right time to leave Down’s Syndrome Scotland. During her tenure the charity has grown its income from £300K to over £1M, the staff team from six to 30, including the introduction of professional fundraising staff, and its influence has substantially increased both throughout Scotland and further afield.  New services have been introduced to improve the communication skills of children with Down’s syndrome and a highly successful team established to provide front line support to families and carers.

A highlight for Pandora and Down’s Syndrome Scotland was the hosting of the World Down Syndrome Congress in Glasgow in 2018.  We welcomed 1150 delegates from around the world and were proud to have witnessed the contributions of many people with Down’s syndrome in the staging of the event.

She leaves to explore pastures new with our thanks and best wishes.

We will shortly be starting a process to appoint a new CEO.