This summer one of our amazing supporters took on the ultimate challenge a gruelling 15 day cycle across the Italian Alps to raise money for Down’s Syndrome Scotland. Here he tells us how he got on and his motivation behind it. 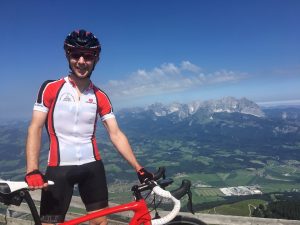 Cycling up a mountain is a truly breath-taking experience. Being amongst the clear air and in beautiful scenery is inspiring enough, but factoring in the challenge of riding a bike up a slope that many people would struggle to walk up, takes it to an entirely new level. This summer I cycled across the Italian Alps in memory of my sister Jennifer, who had Down’s Syndrome. Sadly Jennifer passed away with heart problems aged 7. I was only 3 when she died and unfortunately my memories of her are limited. However, this challenge felt like the perfect opportunity to do something in her memory, to make my parents proud, and critically to fundraise for all the fantastic people involved with Down’s Syndrome Scotland.

I devised a route across the Italian Alps, beginning in Austria and weaving in and out of Italy, via Switzerland, finishing in France, before hopping on a plane and cycling up Mount Etna, an active volcano in Sicily! The route was about 1,200 km over 15 days of cycling, with a combined elevation gain of 51,000 m, which is roughly 6 times up Mount Everest. The Italian climbs are long, hard and steep, often with summits above 2,000 m. The Giro d’Italia, after which my challenge was named, is notoriously more difficult than the Tour de France, and for good reason. My route deliberately sought out all the famous climbs of this torturous race. Fortunately, I would have help, my friend Simon Drake following behind in the car supporting all my food and hydration needs, and my wavering morale.

The challenge began in Austria, climbing the Kitzbuhelerhorn and up to nearly 2,600 m on the Grossglockner mountain road. From here I headed into Italy and tackled the legendary Monte Zoncolan. This is regarded as the hardest climb in European professional cycling, some 11 km at an average gradient of just
under 12%, and with nearly 6 km at over 15%.

The feeling on reaching the top in one piece was incredible, before realising I still had over 100 km to cycle that day. The day ended in the Dolomites at Tre Cime di Lavaredo amongst an incredible but terrifying thunderstorm. From here it was onwards into the heart of the Dolomites, and I tackled the infamous Maratona dles Dolomites route, a famous sportive race featuring 140 km over 7 mighty mountain passes. As a geologist by trade, being amongst these mountains and weaving my way up them was heaven. 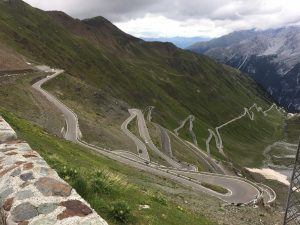 I continued westwards deeper into the Sud Tirol on the Italy-Austria border before reaching Bormio and my hardest challenge yet. I tackled the Stelvio, at 2,758 m the 2nd highest pass in Europe, the Mortirolo, another ridiculously steep “goat track”, and the Gavia all in one day, with over 5,000 m of climbing. The next day things were to take a turn for the worse. Preparing to head up the Stelvio again, I ran into a dog and was thrown from the bike. I managed to dust myself down but my front wheel was damaged. Fortunately the bike was quickly fixed, but I was not. I landed on my chest and although, somehow, nothing was broken, breathing was painful and any bump on the road sent jolts of pain through my ribcage. However, as you do, I lied and pretended I was ok. I wasn’t going to quit because of a silly accident. The next two days on the bike were horrible. The heat was sweltering, the roads were long, steep and undulating.

I managed to rest up a little as we headed in to western Italy and to the Swiss border. As I continued to tap out a rhythm on the pedals, the pain gradually dissipated and my strength returned, helped by a glorious day on the smooth roads in the wonderful scenery of Switzerland. We moved into the Ligurian and Maritime Alps, before tackling the mammoth 32 km of the Colle dell’Agnello. At this point everything seemed to come back to me and I powered up the climb, achieving one of the fastest recorded ascents. 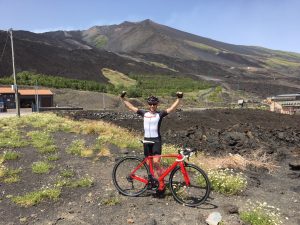 From here, I continued west over the incredible cols of the Fauniera and the Lombarda, arriving into Nice in France, just as they won the World Cup! The next day we flew to Catania in Sicily for one last climb. At nearly 40 degrees and with the sun blazing off Etna’s lava flows it was excruciating, but what better way to finish than at the top of a volcano. At this point it was hard to comprehend what I had done. Five years ago I could barely cycle from the Southside to the West End of Glasgow, but here I was. As I thought of Jennifer and my parents, finally the emotion came out.

I was delighted to receive £1,165 in donations to my challenge and this rises to nearly £1,500 with Gift Aid. I hope I have brought all the great work that Down’s Syndrome Scotland do to people’s attention and raised awareness of how wonderful people with Down’s syndrome are. There is much to be done, but hopefully these funds can help improve someone’s life a little.

If you have been inspired by Dave’s story get in touch with our fundraising team, we can offer you advise and help for organising your own fundraising event and would be delighted to hear from you. Email fundraising@dsscotland.org.uk or call 0131 442 8840.

If you are a person who has Down's syndrome and are 18+ you are invited along to join Brenda for a catch up over so… https://t.co/J7gJoNhkZX