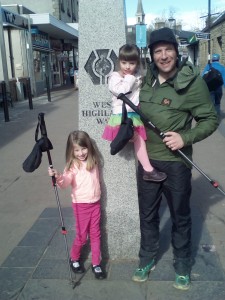 7 days, 192 miles and around 400,000 steps after leaving Milngavie, I was back at just after 4pm today – I had completed my challenge!

It was a beautiful morning as I left Rowardennan at 7.30am, with plenty of blue sky to be seen and the sun spreading some early morning warmth. It hadn’t been a great sleep, but that didn’t matter – I was on my way to the finish line!

I had also picked up another donation – one of the others staying in the same room as me was a man named Andy from Yorkshire, who was stopping in before climbing Ben Lomond today. Turns out he has a niece, who is called Amy and she has DS! So we had a bit of a blether about it being a small world, the condition and my challenge, and he was happy to contribute to the cause.

The stretch down to Balmaha was quite quiet, so thankfully only the birds got to see me peching my way south in the increasing warmth.

I thought the climb up Conic Hill was going to be tough, and I wasn’t wrong! I really slowed down and legs were aching, but I got there in the end and the view makes it all worthwhile.

From there it was fairly easy going terrain-wise, which was just as well! This stretch was busy, and whilst it doesn’t have the same visual impact as the more northerly stretches it is easy to see  it’s attractions.

There was a wee hail storm just before Carbeth, so gloves and hat were donned quickly, but were soon back off again when the sunshine shortly resumed.

By the time I reached Mugdock Park, with a couple of miles to go, I was feeling a bit emotional about my challenge coming to an end, about having completed what had, in some moments (and to some people), seemed unrealistic, and seeing my family again.

And there they were, along with Julie Ionta from DSS, waiting for me at the start / finish point. I got wonderful big hugs from my wonderful wee girls, who had made me a “Well Done Dad” poster, and a super-excited tail wag from my dog.

It was great to be back and great to have made it successfully, and will make a further, post-challenge, update. After a bath, shave and a good nights sleep!